During the following four weeks (Feb 19-March 12 2017) Trisha Phippard, a doctoral researcher at the Institute for Anthropological Research in Africa (IARA) at KU Leuven University (Belgium), will be sharing some reflective notes about her field research in and around Kikwit. This doctoral project is embedded in a larger research project dealing with technology cultures in the DR Congo.

Today I am working in Pay Kongila, a village located 100km from Kikwit. The journey here from Kikwit takes about 6 hours by motorcycle or jeep, following a deep sandy track that crosses the Kwenge River and then weaves its way around rolling hills, thick forests, and many small villages. Of all the routes out of Kikwit, this is always my favourite. The village itself has a population of 7000 inhabitants spread over an area of 100km2, with its centre perched up on the crest of a very large hill. This makes water collection a challenge but offers cooler temperatures, lots of fresh air, and stunning views in all directions.

I am here to visit a friend who is the Médecin Directeur of the Hôpital Général de Référence for this health zone, and to follow up with some tradipraticiens I met here last year. I am also keen to observe the moto ambulance program – a new patient evacuation initiative that I have heard much about – in action.

Congo’s state health infrastructure is organized into a decentralized system of health zones, each with its own reference hospital that is (in theory) equipped with more sophisticated diagnostic equipment like x-ray and ultrasound machines, an operating theatre, and more highly trained doctors and nurses. Each of these zones is divided into smaller health districts, each with its own community health centre or secondary rural hospital, which often have little in the way of material resources and are usually serviced only by nurses and midwives. The premise is that each of these smaller health centres is closer (i.e. within walking distance) to the population its serves, functioning as a first-line point of care to diagnose simple illnesses and refer all complicated cases (such as severe malaria, difficult childbirth, or surgical cases) to the reference hospital.

The reference hospital for the health zone of Pay Kongila. 14.03.2015 © Trisha Phippard

The problem is that these health centres may be quite a long way from the hospital – up to 160km in this zone, for example – making transportation of these referred patients expensive and difficult, especially if the patient is unable to walk. Sometimes there is no option but to carry them by tchipoy (a piece of fabric tied to a bamboo pole), and in many cases they simply are not able to make the journey.

After noticing this breakdown of the referral system, the health zones partnered with Flemish NGO Memisa to develop a new local evacuation technology: the moto ambulance. A couple of years into the initiative, many of the zones have already received the specially adapted motorcycles, and in a few places they have developed a bateau ambulance to evacuate patients by river. The design has evolved over the years, as early models like that with a chariot-style attachment proved unsuitable for the condition of the roads. Pay Kongila received its first moto ambulance – the “third prototype” – in January 2016. It is a normal motorcycle, designed for use on rough roads, with a large reclining seat cushion (along with arm rests and a chest strap) affixed to the back. 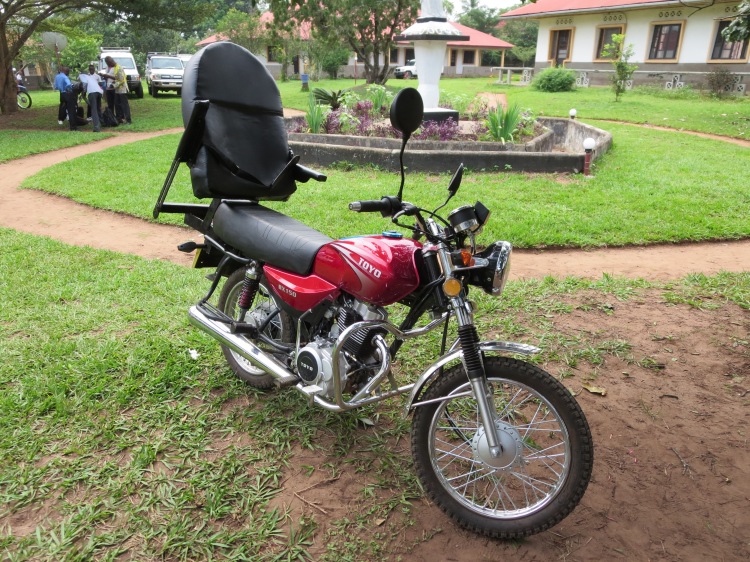 I am working here with Saddam, the sole responsible ambulancier in Pay-Kongila. He works officially as a nurse at the hospital, but because he is also an excellent chauffeur, he has been given the added responsibility of working as the moto ambulance driver. He gets a call almost every day, and travels alone on very difficult roads to retrieve the patients in need, sometimes in the middle of the night. Most of the cases are for women in labour with complicated pregnancies (needing a caesarean or other intervention), children with severe malaria, people with perforated intestines (a frequent complication of typhoid fever), and patients in a comatose state. Because he is a trained nurse, he can intervene and stabilize the patients on route if necessary, and he always carries a bag of basic medical supplies.

I am amazed by his courage and resilience; it is by no means an easy job. The deep sand makes navigating the routes around here slow, difficult work, and when the rains come some of the terre rouge in the forests becomes almost impassable. Sometimes, when he arrives at the remote health centre after travelling a great distance, it is already too late and the patient has died. Many women deliver their babies on the way, including stillborn cases, and a patient even died during transport. If the patient is unconscious or semi-conscious, it is very difficult to keep them on the moto and he has to stop to check their vitals every 20 minutes, slowing the journey significantly. He is not paid anything extra for this arduous all-hours work that comes in addition to his normal responsibilities at the hospital. 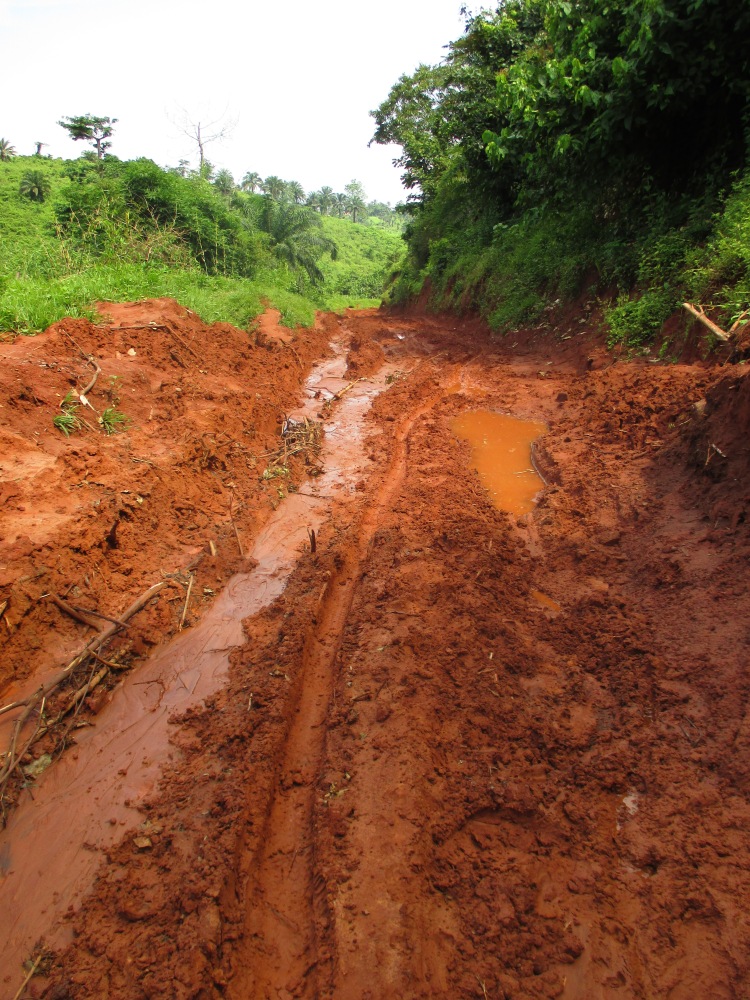 One of the roads out from Pay Kongila with its characteristic ‘terre rouge’. 15.03.2015 © Trisha Phippard

We are at the hospital doing another interview when a call comes in. There is a patient in urgent need of evacuation in the village of Kulungu-Siki, 30km away. Unfortunately, there is no money left in the caisse of the community’s moto ambulance association to buy the petrol to make the trip. It is quickly decided that I will buy the $6 in fuel required for the round trip, and we rush off. My research assistant and I follow on our own motorcycle; travelling at breakneck speed, slipping and sliding in the deep sand, we make it to the village in 75 minutes.

Saddam on the moto ambulance, just before starting the journey. 14.11.2016 © Trisha Phippard

When we arrive, we are greeted at the edge of the village and directed to the health centre, where we are rushed inside. The patient is a 24-year old woman, a young mother of three. She is in a dire state, semi-unconscious with severe abdominal distention. Saddam examines her briefly, while the responsible doctor at the centre (who in fact previously worked as a surgeon at the hospital in Pay, a rare level of expertise to find at a village post like this) shows us a syringe full of blood he withdrew from the woman’s abdomen this morning. Although he performs simple procedures like caesareans onsite, a medical crisis like this requires sophisticated intervention that would not be possible here.

Raindrops start falling on the tin roof; a big storm is coming in. Saddam announces that the case is “very urgent” and that we need to hurry. Still, we are first brought out by the doctor to sit under a tree next door for the tradition of sharing some vin de raphia and noix de cola before departing. The ritual is striking given the urgent condition of the patient and the rapidly blackening sky, but we go through the formalities of sharing his offering, drinking down the wine quickly and rushing off to load the patient onto the moto.