We continue our journey towards Kambove, the last stop before entering Shinkolobwe territory. My co-researcher gets anxious and urges us to buy a few dust masks to protect ourselves against the airborne radioactive dust particles before heading off on motorbikes to one of the closest villages to Shinkolobwe: Kipese.  I keep thinking about the research participant telling me radiation levels are negligible. According to him, those artisanal miners who suffer chronic radiation syndrome get it from constant exposure to medium-level radiation without sufficient access to water to wash off the dangerous radioactive particles covering their bodies or trapped underneath their finger nails. After mining, they eat “bugali”  with their hands and swallow the dangerous particles causing long-term damage. Surveys conducted by local activists talk about babies being born without a brain or abdominal wall amongst other birth defects, and growth problems. The dust mask is too small so I have to wear it the other way around to fit my nose and mouth comfortably. My co-researcher can’t resist his urge to laugh when he sees me struggling with the mask and asks whether my nose is too big, or those masks too small. I wisely ignore the question and mount the motorbike. We leave Kambove behind us and follow a dusty road. It takes us more than one hour to reach a first security checkpoint. From time to time, trucks pass by and I wonder whether the burlap sacks they are transporting contain uranium. A few men are sitting on top of the truck, all wearing the same kind of dust mask we are wearing. Theirs, however, fit perfectly.  I feel like we are all in this together. A  feeling of belonging to a blasted landscape, a radiated world. Such a feeling during  fieldwork is rather rare. Anthropologists never completely blend in but are at the same time more than just mere outsiders. I realize that this feeling is subjective, especially when a few bystanders shout muzungu, mambo? (White man, how are you?) Nevertheless, I enjoy my brief imaginations of belonging while trying to avoid the clouds of dust that swirl around me when the trucks pass by.

After three more security checks and at five kilometers of Shinkolobwe, a mining settlement called Kipese appears at the horizon. This is the closest we will be able to get to the uranium mine without raising suspicion. Kipese is home to the soldiers guarding Shinkolobwe and miners operating a gold mine. Although the surroundings of Kipese are politically not considered as “nuclear”, the mining settlement village is characterized by hidden narratives about uranium and radiation. I ask the chef coutumier about Madame Kipese, the Mami-wata-like figure haunting the flooded Shinkolobwe mine. The older man starts laughing and asks me how I got to know these secrets. I tell him I recently had a vivid dream about her. The chief, accompanied  by representatives of the secret service, the national police and another village elder, all burst into laughter. All of a sudden I feel claustrophobic in the chief’s rather small living room.  He urges me to be careful with such kind of dreams. The laughter changes into awkward silence and everybody in the room is in suspense for what he is going to say next. He opens up and explains how mineworkers fall blindly in love with Madame Kipese and enter certain corridors of the mines upon her command. They do so without ritual protection of the chief. In some cases, the corridors collapse and the men get  trapped inside and die. Others get out of the mines safely, but get very sick soon after. Survivors often lose everything, including their wives.  It’s common in Congo for Chef Coutumiers to organize ritual ceremonies prior to extraction activities for the protection of the miners. Touching the topic of uranium changes the atmosphere in the room and results in a sudden kind of discomfort. While walking through the village and visiting the gold miners, my co-researcher whispers in English (so only I would understand) that it is time to go. A few minutes after having driven off, a younger man claiming to be the son of the chief stops us and gives me his number. He says he could help me with “what I was looking for”. I’ve never completely understood what he exactly meant. 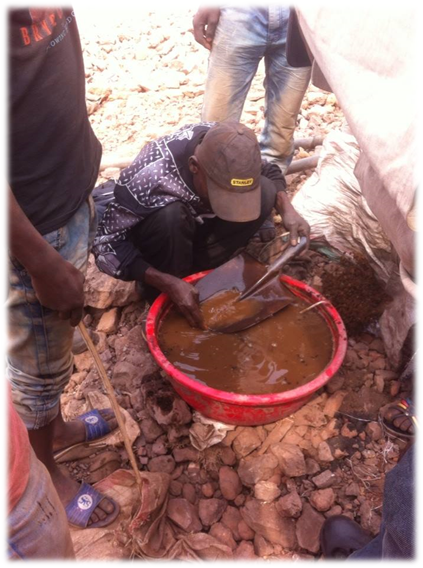 Back in Lubumbashi, my co-researcher explains he had the weird feeling that something was off with the chef coutumier. According to him, the man we met could not have been the real one and he suspected we had been received by a government pawn who was ordered to verify our intentions. That would explain why he wanted us to leave in a hurry. He was convinced we were no longer safe there. Although I really wanted to take his warnings seriously, I could not help focusing on another matter. Since we got back from the surroundings of Shinkolobwe, we both had a terrible itch in the palm of our hands. We went through all possible causes without admitting  what we both actually really thought: radiation. That same evening, I was invited for dinner at Maman Euphrazie’s place. When I reached for a knife, the radio next to me emitted a sharp pitch sound. My company started laughing and asked “ehh, wewe umekuwa creusseur?”  (have you become a miner?). From that moment on, I felt as if I had become a subject of the many urban legends haunting Shinkolobwe. The beliefs and practices surrounding Shinkolobwe are perhaps the strongest form of (cultural) radiation emitted by the blasted landscape of the uranium mine, with a fallout as far as Lubumbashi. The diagnosis was straight-forward: I had been seriously culturally irradiated.