Research in and around Inga – Part 1

During the following four weeks (Jan 20-Feb 10 2017) Barbara Carbon, a doctoral researcher at the Institute for Anthropological Research in Africa (IARA) at KU Leuven University (Belgium), will be sharing some reflective notes about her field research in and around the Inga dam. This doctoral project is embedded in a larger research project dealing with technology cultures in the DR Congo.

Blog One: Matadi – Banana by boat

I arrived at the harbour at 8.30 am as agreed. The pilot who’d be navigating the cargo from Matadi harbour to final destination Argentina arrived a little later on board the CVM (la Congolaise des Voies Maritimes) taxi. He seemed apprehensive, as we’d soon be going through the different control posts giving us access to the harbour and eventually the ship. It’s never easy to pass border control in the presence of a white person he said. It’s an opportunity for the different services in the harbour like harbour police, DGM, ANR etc. to make some money. The commissaire maritime had already informed the harbour officials. A quick phonecall to confirm and the multiple copies of my ID and required authorisations made our passage reasonably smooth. I was getting excited but tried not to rejoice too soon. I was aware that they could stop me from boarding at any moment. We climbed on board  via a rope ladder attached to the flanks of the ship. I realised just how enormous these ships are, many for example arriving fully laden with coal from South-Africa, petrol from Angola or vivres frais from Namibia but setting off from Matadi completely empty. The pilot presented me as his assistant to the Croatian/Filipino staff on board. It didn’t take long however for them to realise I was of no particular use and devoid of any knowledge related to navigation and maritime life. But I was welcomed nevertheless and together with the pilot treated with great respect. On board a ship you quickly understand that there is a code of courtesy and politeness, to be strictly adhered to and quite different from offshore life. The foreign staff are also highly aware that without the Congolese pilots, they couldn’t navigate the river without accidents or stranding on a sandbank somewhere. The river’s sanded areas shift and move and without careful attention and the regular sondages, the pilots too would get lost in the maze of islands and sandbanks the river becomes, especially in the stretch Boma – Banana. They generally show their gratitude by giving the pilots a gift at the end of their shift. Sometimes this is a box of cigarettes, sometimes a part of their load, for instance 30kg of a fish named Capitaine. This is highly welcomed considering that the CVM hasn’t been paying its pilots for about 8 months now. After two days of striking a few weeks ago, the director was replaced. Now they are waiting for their money, hoping that the new female director will be more responsible.

We “set sail” into the bright sunlight and I noticed the magnificent green mountains looming nearby like patient giants over this deeper stretch of water connecting Matadi with Boma. This section of the river is less wide, much deeper and thus less dangerous to navigate. I saw miles and miles of silver water, mountains and uninhabited shorelines, feeling a profound sense of relief in that they are largely unpopulated. But for the Congolese pilot, this emptiness represents wasted opportunities, a lack of initiative and a sure sign that the country isn’t progressing. We saw a few villages along the shoreline as we approached Boma. For the inhabitants here, it would take about thirty minutes by pirogue to get to the city. But distance is relative considering the time we can spend stuck in trafic jams or public transport in big cities. A silence encircled the ship and it gave me the impression of time slowing down. I observed the bow of the ship as it slowly glided towards the ocean, creating an outward flow of ripples that caressed its sides. The regular interactions between those steering the ship and the pilots brought me back to reality. This job requires extreme focus. The pilot must keep his eyes on the river and the different signal points only he can interpret. With a regularity, he would shout orders like “midship” or “starboard ten” to be repeated each time by the mates or officers on steering duty, ensuring that through repetition they would understand the order and execute it well. Once in a while they would update the pilot to check the ship’s position, speed and course.

When we reached Boma, it was time to change pilot. The big rope hanging down the side of the ship was lowered about 50 cms so it would reach the canoë rapide in which the pilot would step after climbing down. The other pilots climbed aboard. They were accompanied by an apprentice who had just finished his maritime training in Morocco. Most of the the older generation of pilots had studied in Belgium, beginning in Ostend (my hometown) to complete their studies in Antwerp. One of the pilots used to live in the same building as Marvin Gaye while he was in Ostend. The world suddenly became really small. The stretch Boma – Banana required even more focus, as it is full of little islands and very shallow waters. The ships that usually do the dragage are both broken but a Belgian ship the “Orwell” has come to help them out for the time being. I was able to speak on the ship’s telephone with one of the crew members from Antwerp on board the “Orwel” who happened to be navigating next to us towards Boma. The conversation was a little awkward at the beginning; I know we Flemish don’t always like to meet on foreign land but this meeting was out of the ordinary and we both understood it was worth the greeting. One of the things I learned while being on fieldwork is that it’s important to appreciate the small opportunities we get when we choose to be open and share with those we may otherwise avoid; as if this may helps us to live more fully or more consciously when we eventually return back home.

This stretch of water led us to Banana. There it was my turn to leave the ship and climb down the long thin rope ladder to enter the small canoë rapide waiting for us below. I felt like I was in some sort of James Bond film or an episode of  “Miami Vice” but then without the glamour and the glitter, climbing down a rusted cargo instead of leaving a flashy helicopter. I couldn’t resist inwardly declaring “I am in love with adventure” and understand the irony of this. One person’s adventure is indeed often another person’s nightmare when for them it is not a unique occasion but a bitter reality expressing a lack of means and almost a monotony of risk. We had to hold tight to prevent being swung off board or getting hurt– the less idylic side of a rescue dinghy trying to face big oceanic waves. We arrived on the shore and were welcomed by the CVM colleagues operating the radio in the Banana office. 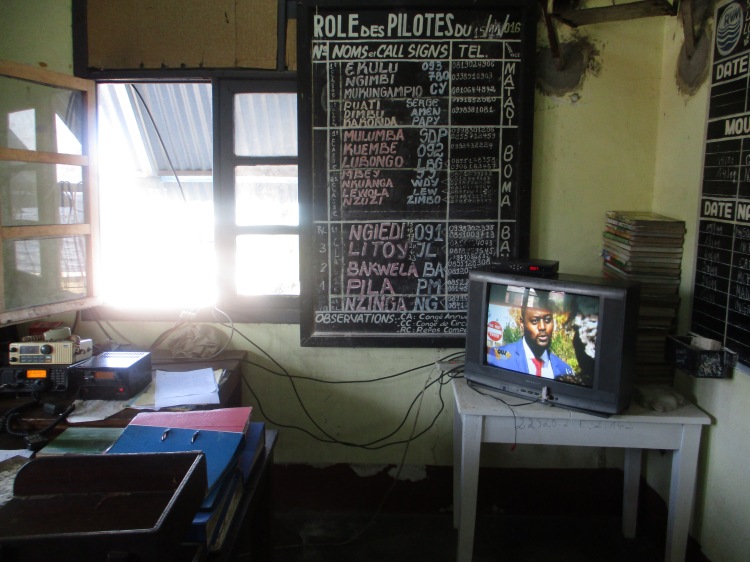 Banana is actually a thin stretch of land in the shape of a banana. There are some villages, lots of palm trees and sand which at times completely covers the main road as the tides of the sea rise to their height. They dropped me off at the hotel in Mwanda, a place many visit as tourists or visit to buy cheap petrol. I packed my bikini and my towel and went to find the beach. I’d longed for this moment for a year.  A “good Samaritan” showed me the way to the beach and guarded my bags while I indulged in the sensation of the water on my overheated body. The airco in the ship was broken. Even the plastic bottles, cans and small plastic bags floating around me somehow couldn’t spoil the moment despite it being rather disgusting. I finished my evening staring at the ocean and watching the sun going down. The full moon guided me back to the hotel. This moon hadn’t been seen since 1948 and its glow eased my spirit and gave me hope for the future, giving everything around me a touch of magic. It’s for those little moments, I suppose, that we live. It’s definitely for those little moments that I live.

One thought on “Research in and around Inga – Part 1”